A selection of the finest new events on sale with Skiddle
Skiddle Staff
Date published: 18th Jul 2022
Hotter than the temperature reading outside at present, this week’s latest New On Skiddle is chock-full of fire events!
Boasting tickets for a diverse mix of spectacular shindigs, set to run over the coming days, weeks and months, this Monday’s blog contains a one-off album launch show from Aussie dance floor commander, Mall Grab, a performance – neigh – an education in how to rap from one of the greats of hip hop, Busta Rhymes, as well as food and beer-extravaganzas from the teams behind Manctoberfest and UKG Brunch.
Scroll further down the page to check out a select handful of the latest experiences on Skiddle, with tickets now available to buy.

(Click or tap in the event titles, artist or venue names for tickets and more) 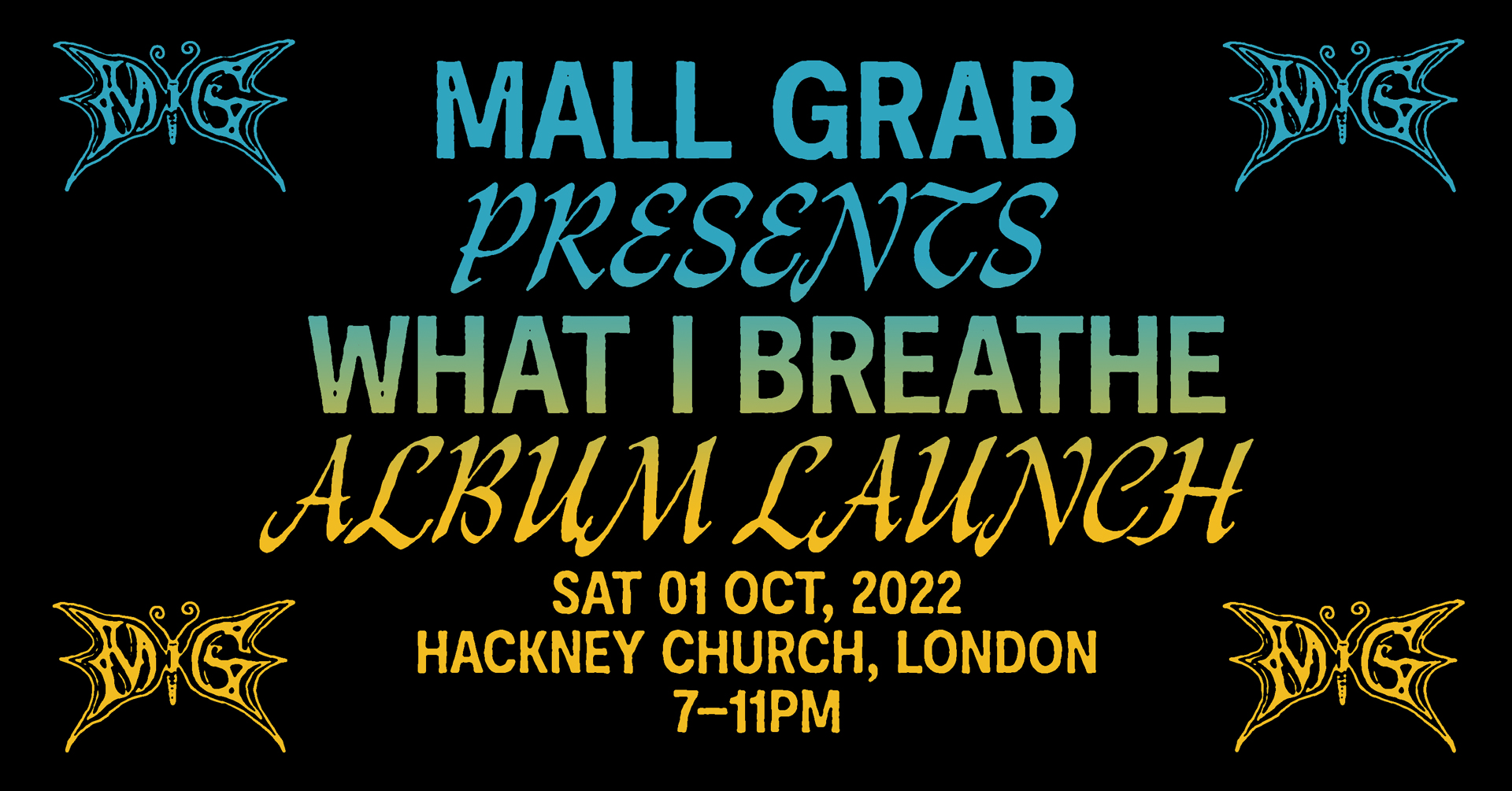 When: Saturday 1st October 2022
Where: Hackney Church in London
Discerning DJ and producer of high octane house and techno, Jordan Alexander, known widely amongst fans of electronic music as Mall Grab, has announced plans to launch his brand new album, What I Breathe, with a very special party at East London venue, Hackney Church this October.
The London-based artist, originally from Australia, who broke out onto the scene back in 2018 with his first album release, Outside, has since gone on to conquer audiences worldwide with his energetic live show and genre-defying brand of music. Gathering his years of experience producing, touring and releasing, for labels the likes of Steel City Dance Discs and Unknown To The Unknown, his latest project is one of his most accomplished to date, showcasing a diverse mix of the elements that have played a hand in helping to create his signature sound over the years.
Expect a night teeming with special guest appearances and only the best in live sound and staging production. 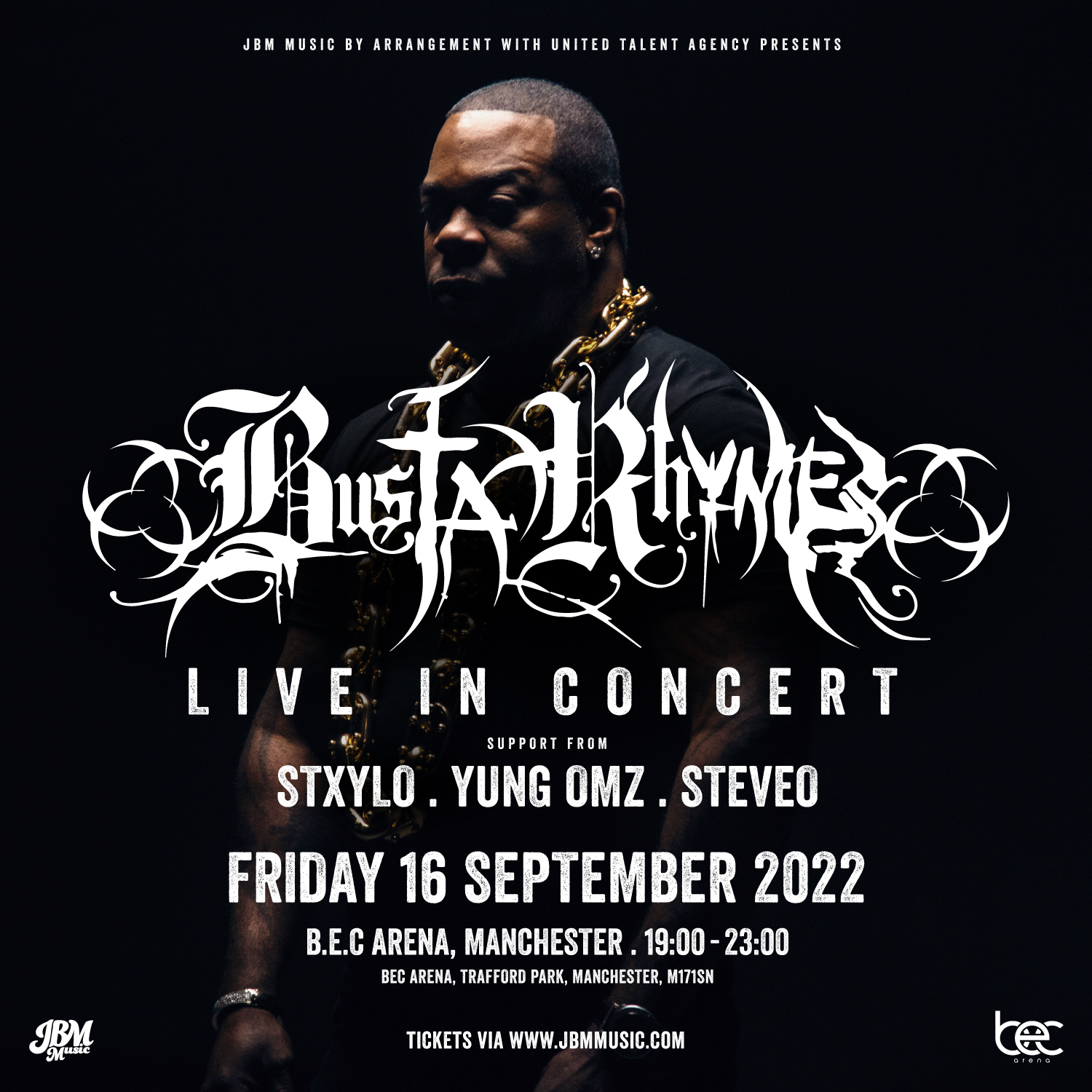 When: Friday 16th September 2022
Where: BEC Arena in Manchester
A true pioneer of the golden era of hip hop, American rapper, musician and record producer, Busta Rhymes will journey over to UK shores this September for what is set to be an unforgettable night of live music at Manchester BEC Arena.
The fifty-year-old rap legend, internationally renowned for his unparalleled flow and lyrical talent, has enjoyed a long career at the very forefront of the scene, unleashing instantly recognisable hip hop anthems the likes of ‘Woo-Hah’, ‘Break Ya Neck’ and ‘Gimme Some More’. He’s also noted for his high-profile collaborations having basically linked up with every other big name in the genre through the decades – from A Tribe Called Quest to Dr. Dre, Anderson .Paak and Missy Elliot.
Don’t miss your chance to catch Busta headlining the BEC Arena alongside support acts Styxlo, Yung Omz and Steveo. Tickets on the link below…

When: September – December 2022 (Multiple dates)
Where: Various venues across the UK
Coming to thirteen cities around the UK, throughout the latter stages of 2022, DNB Allstars presents a brand new touring concept – Caged.
The team of promoters behind what is arguably Britain’s most raucous drum n bass events brand and online community have put their heads together to form a novel and immersive live music experience. Transporting skankers and bass heads alike into a world of visuals, amid specially curated laser stages, each event is also set to feature an insane lineup of acts, dropping massive anthems through the finest of sound systems.
Stop-offs on the tour – running from September through until December 2022 – include Liverpool, Edinburgh, Nottingham, Newcastle, Cambridge and Birmingham. Hit the link below to find out to discover more dates and locations.

When: September – October 2022 (Multiple Dates)
Where: BEC Arena in Manchester
Beer drinkers rejoice! Manctoberfest is back again in 2022, lending a hand once more in marking the world-famous Oktoberfest celebration but with its own, natively inspired Mancunian twist.
Each of the events, running across the same dates as Munich’s Oktoberfest, will see some of the region’s finest tribute acts heading to the stage, to perform a score of Manchester’s most well-known anthems.
Those who come by tickets should expect to hear renditions of cult classic tracks from iconic Madchester acts such as The Stone Roses, Happy Mondays, The Courteeners and The Smiths, all whilst guzzling down German beers from German steins, and feasting upon pretzels and other traditional Bavarian delicacies.
Manchester Adored resident DJ and radio presenter, Dave Sweetmore will take on hosting duties with the Jaeger Maestros German Oompah Band also on hand to bring those authentic feel-good German sounds. 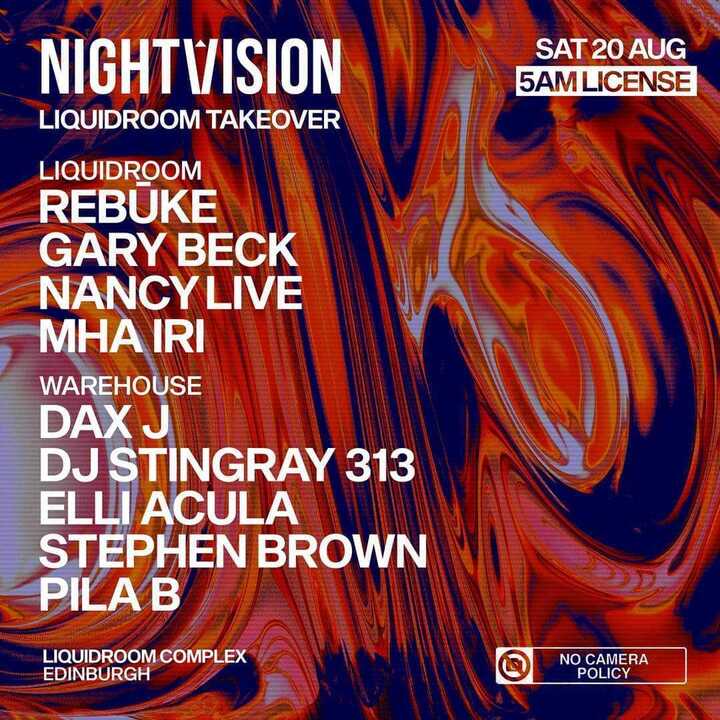 When: Saturday 20th – Sunday 21st August 2022
Where: The Liquid Room in Edinburgh
Terminal V’s sister clubbing brand, Nightvision is gearing up for its long-awaited return to Edinburgh Fringe Festival this August.
Said to be preparing their biggest show to date, as part of the upcoming, world-renowned Scottish cultural event, the expert team behind the brand have managed to secure a hefty selection of some of Europe’s most sought-after dance acts.
Appearing across both floors of The Liquid Room – The Liquid Room and The Warehouse – dancefloor addicts can look forward to blinding sets from headline names such as Dax J, the Berlin-based dark techno connoisseur, and Irish deck-wizard, Rebuke. Other names performing on the night include Stephen Brown, Gary Beck, Mha Iri, DJ Stingray and Elli Acula.
Rave through the night and into the dawn – with music running up until 5 am on Sunday 21st August – at this mammoth all-nighter. 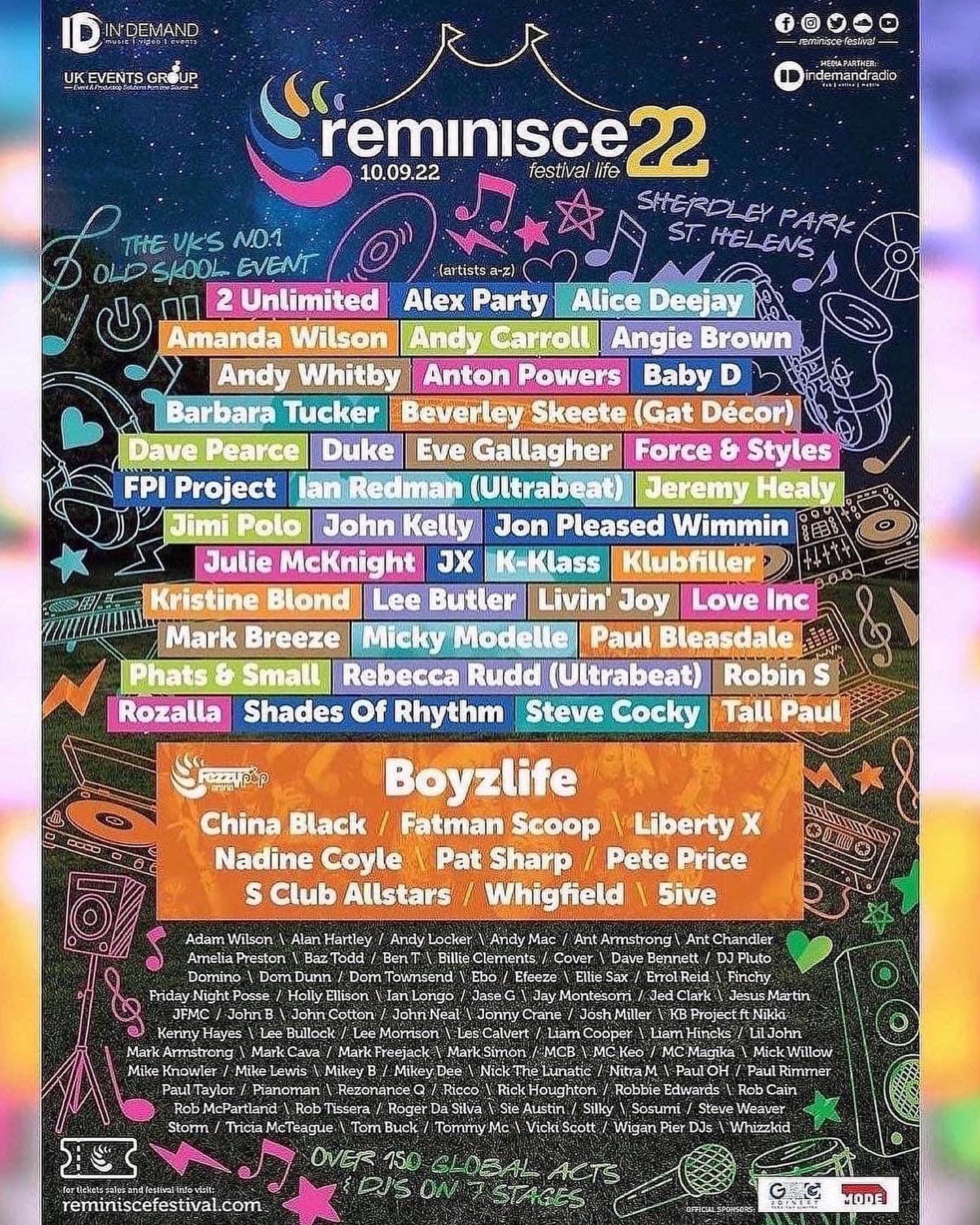 When: Saturday 10th September 2022
Where: Sherdley Park in St Helens
90s pop icons and dance greats, Five, Boyzlife, Liberty X, Robin S, Rozalla, Angie Brown, Fatman Scoop, Tall Paul, Julie McKnight and Whigfield will join over one-hundred-and-fifty other internationally acclaimed artists, performing across seven massive arenas at the return of this year’s Reminisce Festival.
A weekend of dance floor nostalgia awaits all those who get their hands on tickets for this always-in-demand musical spectacle. Get ready to move your body to club classic gems and timeless house anthems across one extended day of partying in the wide open spaces of St Helen’s Sherdley Park – from ‘Show Me Love’ and ‘Saturday Night’ to ‘Everybody Get Up’.
Tickets for the UK’s number one old skool event can be purchased on the link below. Hurry! They won’t be around for long… 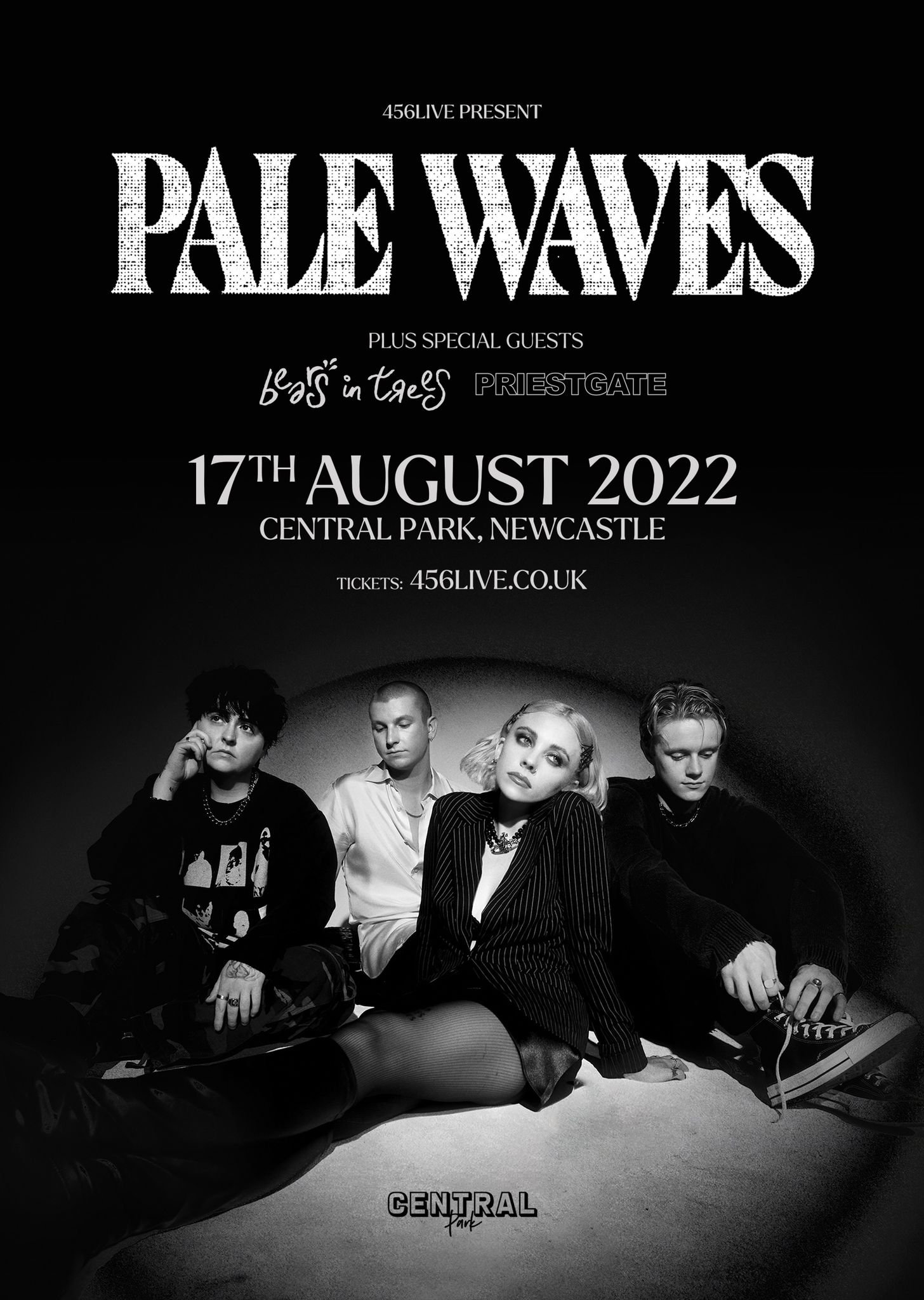 When: Wednesday 17th August 2022
Where: Central Park, Newcastle in Newcastle Upon Tyne
What do you get when you mix the goth aesthetic of The Cure with the pop sensibilities of 80s-sounding acts the likes of The 1975?  Answer – Pale Waves.
Possibly one of the most successful groups to come out of Manchester in recent times, the four-piece, founded by lead singer and guitarist, Heather Baron-Gracie and drummer Ciara Doran, has taken the world by storm with their unique melancholic brand of synth-tinged indie-pop.
Having toured their catalogue extensively over the past four years – including albums, My Mind Makes Noises and Who Am I? – performing at festivals such as Kendal Calling, the Neighbourhood Weekender and Leeds and Reading Festival, the band are once again out on the road. Due to land back in England towards the end of the month, once completing their tour of America with Aussie pop band, 5 Seconds of Summer, Pale Waves are then confirmed to make a live appearance at Newcastle venue, Central Park.
Catch them performing alongside Bears in Trees and other yet-to-be-announced special guests on Wednesday 17th August. Tickets on the link below… 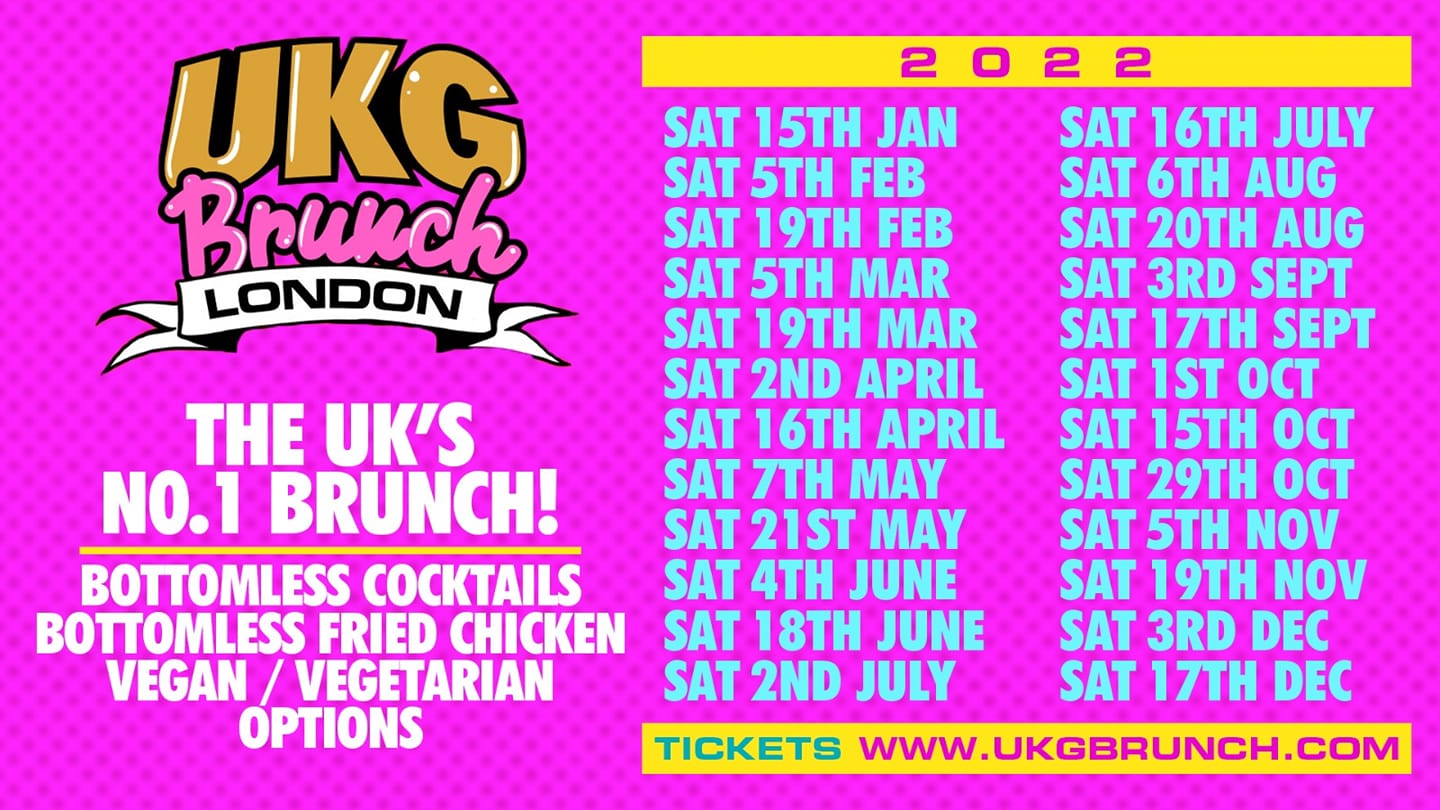 When: Saturday 3rd September 2022
Where: Secret Location London UK in London
The original UKG Brunch event comes to the English capital this September, taking over a yet-to-be-disclosed, secret venue for a day of partying, boozing and gorging on the finest finger-licking chicken around.
For ninety long minutes, guests at the event – held on Saturday 3rd September – can take advantage of the bottomless rum punch, chicken wings and fries on offer, with mouthwatering food being supplied by one of London’s most-approved chicken vendors – It’s A London Wing. Meat not quite your thing? Don’t fret! UKG Brunch has you covered with vegetarian and vegan options available to those who choose to avoid animal products
And what UKG Brunch would be complete without the entertainment!? Expect a sublime soundtrack from the biggest and baddest UKG DJs and MCs to accompany your food and drinks.
More details, including artists set to appear, are still be announced. Watch this space for more.


Check out our What’s On Guide to discover even more rowdy raves and sweaty gigs taking place over the coming weeks and months. For festivals, lifestyle events and more, head on over to our Things To Do page or be inspired by the event selections on our Inspire Me page.

Read more news
live news
club news
festival news
all latest news
Not a Facebook user? Login Here
Order History / Your Tickets
Gigs  ●  Clubs  ●  Festivals ●  Things to do
“On your side since 2001, because we believe true fans deserve a fairer and smarter way to discover events they love.”

© 2001 – 2022 Skiddle Ltd  |  Skiddle is a registered trademark  |  ALL RIGHTS RESERVED
We use cookies to make sure we give you the best experience possible. By continuing, you’re accepting that you’re happy with our cookie policy. Click here to find out more.
❌