Since Joseph Schumpeter’s pathbreaking work, technology has been recognized as the center of economic growth and development. Technologies used by firms are central to the process of creative destruction. But despite this centrality, there is no comprehensive body of data across countries and sectors that allows measuring where the frontier is, how far firms in developing countries are from it, and what technologies firms use in their day-to-day operations.
In “Bridging the Technological Divide,” the seventh volume of the World Bank’s Productivity Project, we analyze the first round of the Firm-level Adoption of Technology (FAT) survey data. This is a new survey instrument aiming to measure the technology used by firms. The new methods and data collected through our survey instrument allow practitioners and policymakers to look inside the “black box” of technology adoption by firms and identify key constraints to the digital transformation. Specifically, the book analyzes data from more than 13,000 firms in 11 countries,* across a variety of regions and income levels, and measures more than 300 technologies applied to general and sector-specific business functions. The FAT data opens new avenues of research on technology, such as the relationship between task outsourcing and technology adoption. This survey empirically validates some already known facts, for example the positive relationship between technology and productivity at the firms and country level. Importantly, our data also dispels some myths about technology adoption and use.
One such myth is related to the higher frequency of leapfrogging in new technologies. However, in reality, technological progress is a continuous and accumulative process. It is a process that requires firms to progressively acquire the capabilities to adopt more sophisticated technologies.
The diffusion of mobile phones is a prominent example frequently cited to illustrate the process of leapfrogging. The first mobile phone call was made in the early 1970s, but it was not until the 2000s that the technology started to diffuse rapidly across middle- and lower-middle-income countries, disrupting the diffusion of fixed-line telephones. Low-income countries jumped directly to the new technology. Using large firms as a proxy for early adopters of technology, the analysis of the FAT data shows that the pattern observed in firms’ use of mobile versus fixed-line phones is consistent with leapfrogging (see Figure 1). Small firms (late adopters) are almost as likely as large firms (early adopters) to adopt mobile phones in business operations. 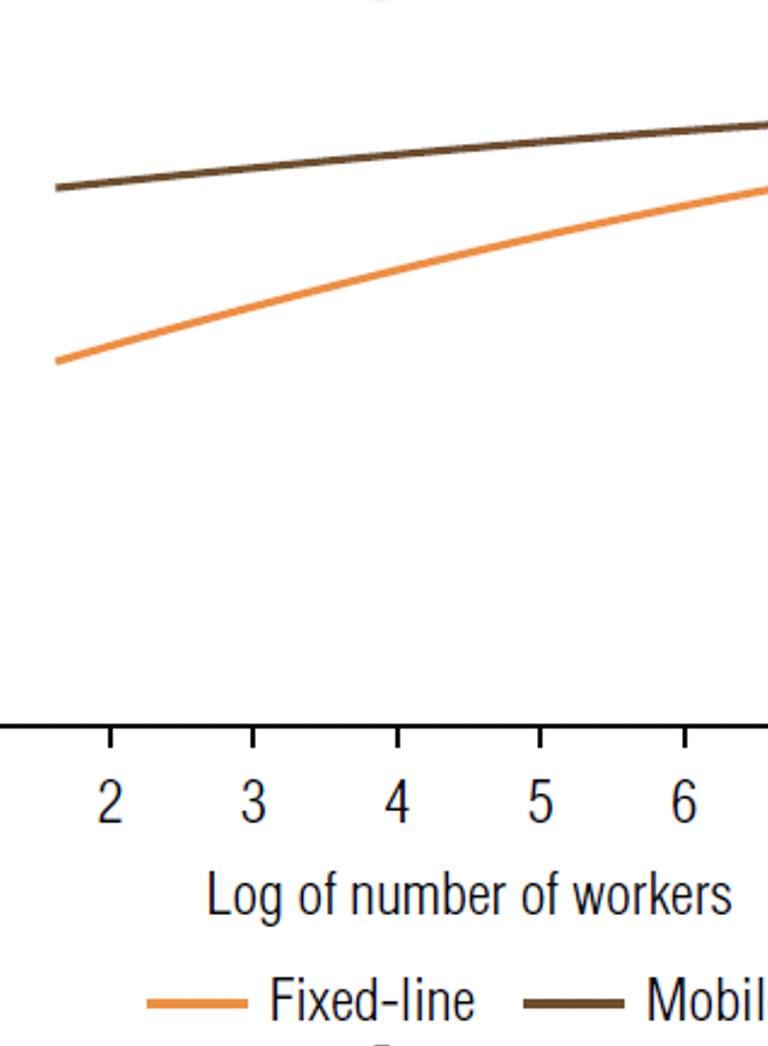 Source: “Bridging the Technological Divide,” 2022.
However, this pattern does not hold for other technologies. In fact, leapfrogging is not commonly observed across most new technologies used by firms. For example, when looking at technologies such as: a) design, for wearing apparel or b) merchandising, for retail (Figure 2), we find a different pattern from above. The figure shows that the likelihood of adopting more sophisticated technologies (the orange, the red, and the yellow lines, respectively) increases with firm size (the proxy for the time of adoption) and follows the order of sophistication of the technologies available—as identified by sector experts over the design of the FAT survey ex-ante. More sophisticated technologies are much less adopted by small firms. 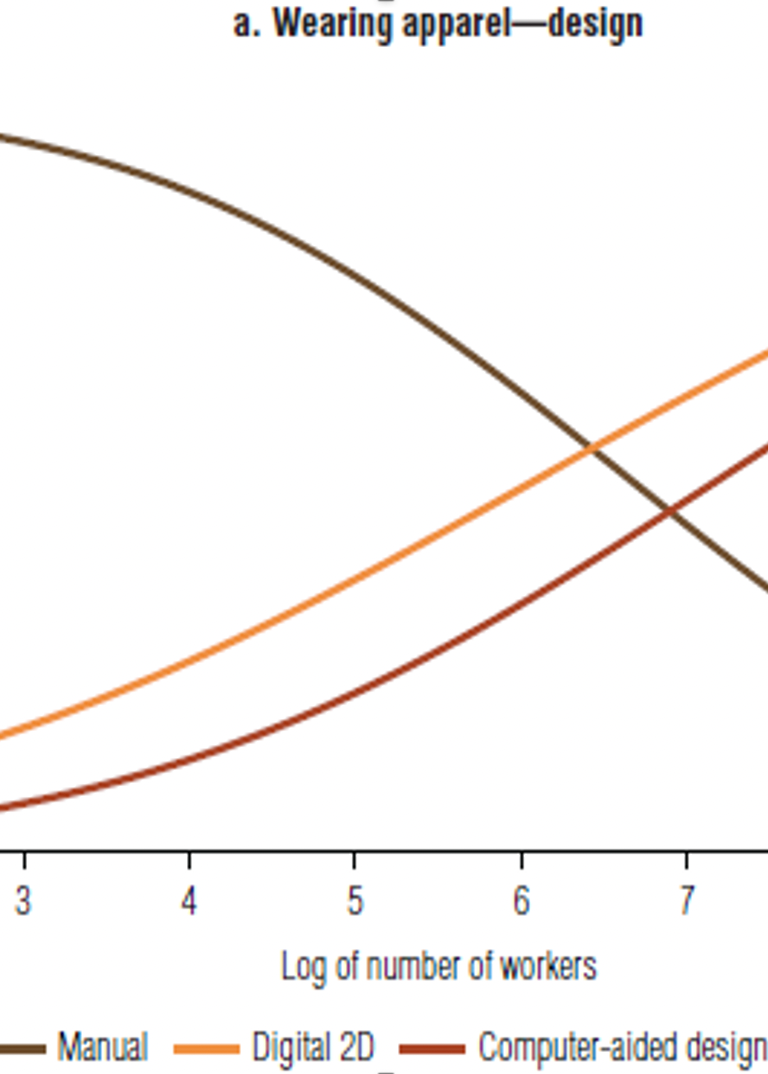 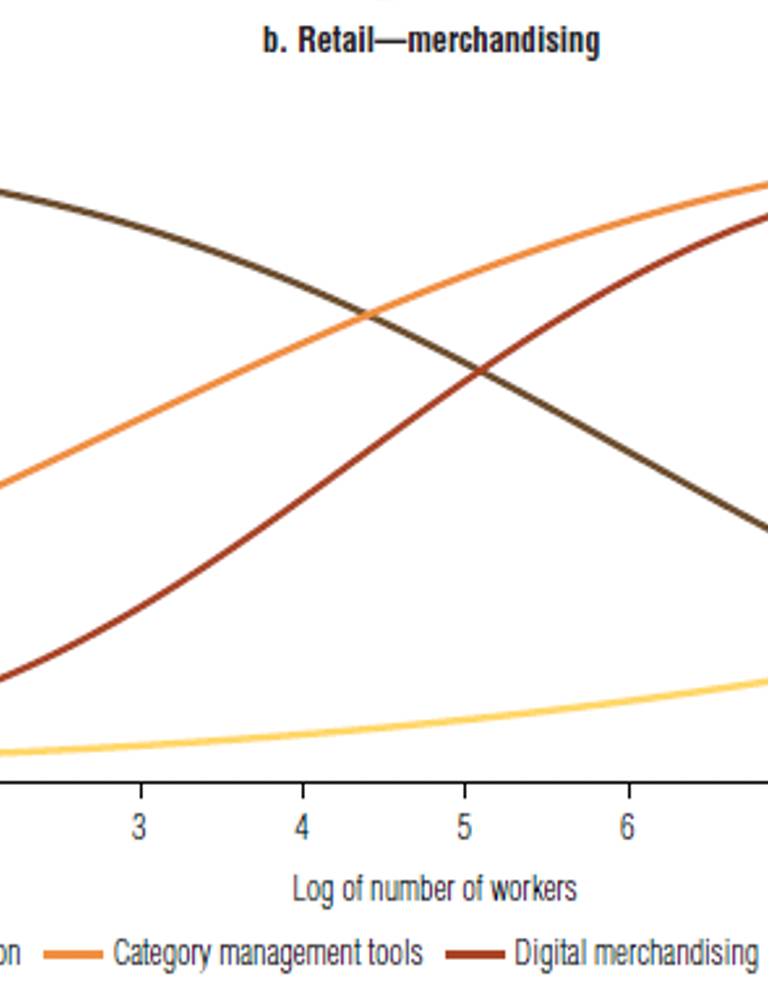 Source: “Bridging the Technological Divide,” 2022.
Overall, the results from the FAT survey support the hypothesis that technology upgrading is mostly a continuous process. This pattern is common across new technologies in business functions in different sectors —agriculture, manufacturing, or services. The pattern also holds for technologies used in tasks that are common to all firms, such as business administration, planning, sales, and quality control. An important policy implication is that governments should keep prioritizing actions toward building capabilities that facilitate technological upgrade, from the perspective of a continuous and gradual process. Opportunities for leapfrogging may still exist, but they tend to happen under very specific conditions and are unlikely to generalize across most technologies or significantly bridge the technological divide.
*Note: Bangladesh; Brazil (only the state of Ceará); Burkina Faso; Ghana; India (only the states of Tamil Nadu and Uttar Pradesh); Kenya; the Republic of Korea; Malawi; Poland; Senegal; and Vietnam.
Future Development
The Future Development blog informs and stimulates debate on key development issues.
This blog was first launched in September 2013 by the World Bank and the Brookings Institution in an effort to hold governments more accountable to poor people and offer solutions to the most prominent development challenges. Continuing this goal, Future Development was re-launched in January 2015 at brookings.edu.
For archived content, visit worldbank.org »